We hope you enjoyed the first instalment, here are days 3, 4 & 5 as described by Dan, Jenna and Joe!

Days one and two were starting to take a toll now. Nevertheless, spirits remained high. After we’d had our fill of bacon rolls and coffee, we performed some light stretching and we set off once again.

We took advantage of the early flat terrain. Soon enough though, we received a swift reminder that this wasn’t going to be getting easier as we encountered one of the most challenging uphill sections of the walk – not helped by the smiling, sweat-free faces of hikers breezing past us who opted to travel the “traditional” direction.

About 3 miles short of our next stop, we had a slight hiccup as we’d taken a wrong turn. We tracked back but were still puzzled. Thankfully, a Geordie traveller came along and was similarly confused. We told him which way we thought it was so on he went without question. He didn’t return – our “canary down the mine”.

A mile to go before lunch, a suspicious looking Highland cow obstructed me. Jenna, having previously worked on a farm, assured me that the cow wouldn’t tackle me – not my most masculine moment.

At last we’d made it to Beinglas Farm. The umbrella donning the Tennent’s logo was a sight to behold. We’d heard rumours of how tricky the next few miles would be so Ross, regrettably, investigated on internet forums.

Fully replenished, we headed towards Loch Lomond which we’d heard offered arguably some of the best views in Scotland – it was absolutely stunning. We were discussing which Harry Potter characters we would be and somebody had nicknamed the biggest boulder on the next stretch “BOULDERMORT”. Given how easily amused we are, this title stuck immediately.

Moments later, Kate came along with tears of laughter streaming down her face. She’d been submerged up to her knees in a muddy bog and broken her walking stick. A friendly German came over to assist her. Ross contemplated challenging him to a penalty shoot-out but wisely reconsidered given our nations differing fortunes when it comes to spot kicks.

Awkwardly, we clambered over a series of huge rocks. Pace-setting, Pom Bear-less Fin didn’t appreciate our words of encouragement (“OH COME ON!”). Joe and I were somehow off track, meaning we could turn back costing us 30 seconds. Instead, we scaled the side of a dangerous slope which would usually require rock-climbing equipment.

Finally, we were in Inversnaid! Joe was fist pumping like crazy. Upon arrival at the hotel, I found out that I’d be bunking with an Ecuadorian couple who were on a romantic getaway. It was hotter than the annual Quito chilli festival in there. I’m sure the last thing they wanted was a sweaty stranger killing the mood.

Upstairs they had a cool lounge with a hippie vibe to it. One chap was playing the guitar… that sort of place. The staff were tremendous and even offered us a free round of beer!

Friday morning saw the return of the infamous wet and wild Scottish weather, and over a very rushed breakfast it was decided that we would enter round 2 of battle against bouldemort as a united front, and more importantly as miles of jagged rocks and tree stumps become even more dangerous in wet weather. I treasure the fact that between the six of us, we can all be as puerile as laughing hysterically at the idea of “Bouldemort” and which Harry Potter character we would liken each other too, yet be sensible enough to understand the importance of looking after each others safety.

Walking together allowed for some very interesting conversational topics such as the classic who we would take on a desert island, which historical moment would we travel back to and, rather worryingly, what criminal act we would commit should there be no consequences. Perhaps the less said about these talks the better, and I shall leave the answers up to the reader’s speculation.

After a defiant win against Bouldemort, we passed by Ben Lomond and continued to walk along the rest of Loch Lomond, meandering through forests and stumbling across intermittent clearings in the foliage where low lying fog and estranged fishing boats made a rather eerie and almost haunting atmosphere. To say the Loch was impressive is an understatement; it is so vast and mysterious, so majestic and powerful, and as you read and hear about but don’t quite appreciate until you have walked the full length of it; so bloody big.

Day 4 saw two pit stops; the first in Rowardennan and then an early afternoon rest at The Little Oak in Balmaha. I can’t quite describe the sense of pure joy seeing a pub at the end of a road after such long stretches of seemingly neverending paths, and the amusing sight of the lads punching the air and shouting “cider!” at first sights of watering holes. It was at said pub that we denied Fin what must’ve been his fifth attempt at bribery to get himself out of the walk, his threats of jumping on the next bus, and thoroughly crushing his dreams of a gentle stroll along the B road that would take us straight to Drymen. Ross also had to endure some questionable advice from a local who suggested it was in fact walking boots that were causing his pain, and that had he attempted it in normal shoes he would be in a much better state. I have to admire the way he managed to remain calm and polite in the face of such utter garbage coming out of this lady’s mouth, whilst the rest of us were just thinking ‘give it a bloody rest, woman’.

The afternoon cleared up and we journeyed on up through miles of beautiful farmland in the sunshine, before reaching the peak of the climb and catching first sightings of the final destination. At this point I heard Joe stating the infamous “Mile and a half, all downhill from here” – a phrase coined from day 1, which by now you will have gathered that that was far from the truth, yet still provided comical value. 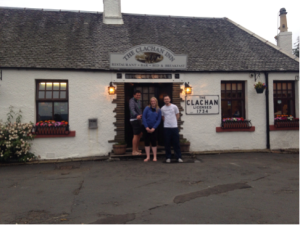 We eventually made it to Drymen, where we were greeted at arguably the nicest accommodation of the trip with tea and scones, and a very warm welcome from lovely hosts. (It was called ‘Kip in the Kirk’ should anyone ever find themselves in that part of the country – I highly recommend it) Safe in the knowledge that the next day would be the final day of the walk, we shared a wonderful evening of dinner, drinks, cards, and laughter about the day’s events (mainly at Fin’s misery, as usual).

Day 5: Drymen to Milngavie (pronounced Mulgay, for those of you, like Joe, who were unaware of this before arriving in Glasgow)

By Joe Matthews
It was a great feeling waking up on day 5 knowing that all we had was a paltry 12 mile walk to complete. Although spirits were fairly high as we ate our breakfast, they were not quite high enough to exchange pleasantries with a Frenchman (a fellow inhabitant of the Kip in the Kirk B&B), so we were all in agreement that it was a good job Ross was there to act as the spokesman for the group. Main topics of discussion included the meaning of ‘Chateau Neuf Du Pap’, the impossibility of completing the West Highland Way in 14 and a half hours (the record), and just how ‘homemade’ the ‘homemade marmalade’ actually was. 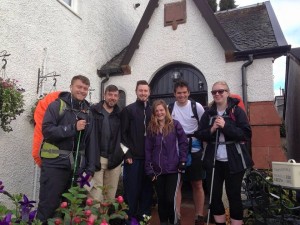 Not only was this the shortest day of the walk, but it also proved to be by far the easiest with minimal inclines and a very welcome road for most of the way. This of course did not negate the beautiful scenery and countryside that was previously experienced. It also made a nice change that we all walked together for the first half of the journey. When I say ‘all’, I mean everyone except the excruciatingly slow Fin who lagged behind the group from mile one.

We had our eyes on a whiskey distillery for our first and only stop of the day, however this proved about 300 yards too far away as there was a conveniently placed pub directly in our path in a small town. After some light refreshments and a bacon sandwich, we quickly rambled on with our target of reaching Glasgow within a reasonable hour to give ourselves plenty of time for a few beers and a celebratory curry. After a mile or so I realised I had left Ross’ umbrella in the pub. I’d be damned if I was to carry an umbrella 93 miles for no reason whatsoever, only to leave it in a pub 7 miles short of our destination, so I walked back to retrieve it as the others carried on. It wasn’t long after restarting that I caught the sight of the snail-paced Fin with his fluorescent orange shell of a bag in the near distance.

The final stretch of the West Highland Way was a time for contemplation and summary of the walk as a whole. Although there were mixed reviews concerning the enjoyment level of our short 4 and a half days, we were all in agreement about the stunning scenery and unique character of the Scottish Highlands.This was personified through our final steps of the walk when a bagpiper appropriately began playing almost as soon as we touched the obelisk marking the end of the way. After 40 minutes or so, Fin managed to find his way to the end where we had a cider waiting for him, although his mood didn’t lighten at all. 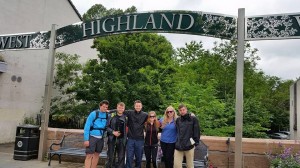 Needless to say, once we had finished, it wasn’t long before we were in a pub in Glasgow enjoying a few drinks, whilst chatting relentlessly about the many stories and highlights of a memorable week in the beautiful Scottish Highlands.

As the guys have mentioned throughout these blogs, we had an absolutely incredible experience in the Scottish Highlands and we are delighted that we have been able to raise just short of £3000 to support locally led development projects in Uganda. Thanks so much for all of your support and sponsorships, it really means a lot to us.

If you are interested in arranging a Walk for Wellbeing with your friends and family, or would like to find out how to get involved in a fundraising event that we have planned, then please get in touch as we would love to hear from you!
Thanks again Kate, Fin, Dan, Jen & Joe – here’s to next year!

Uganda. Coffee. Travel. The blog of The Zuri Project. Guest bloggers welcome and encouraged - get in touch via our website @ www.zuriproject.co.uk View all posts by Ross Young.

This site uses Akismet to reduce spam. Learn how your comment data is processed.